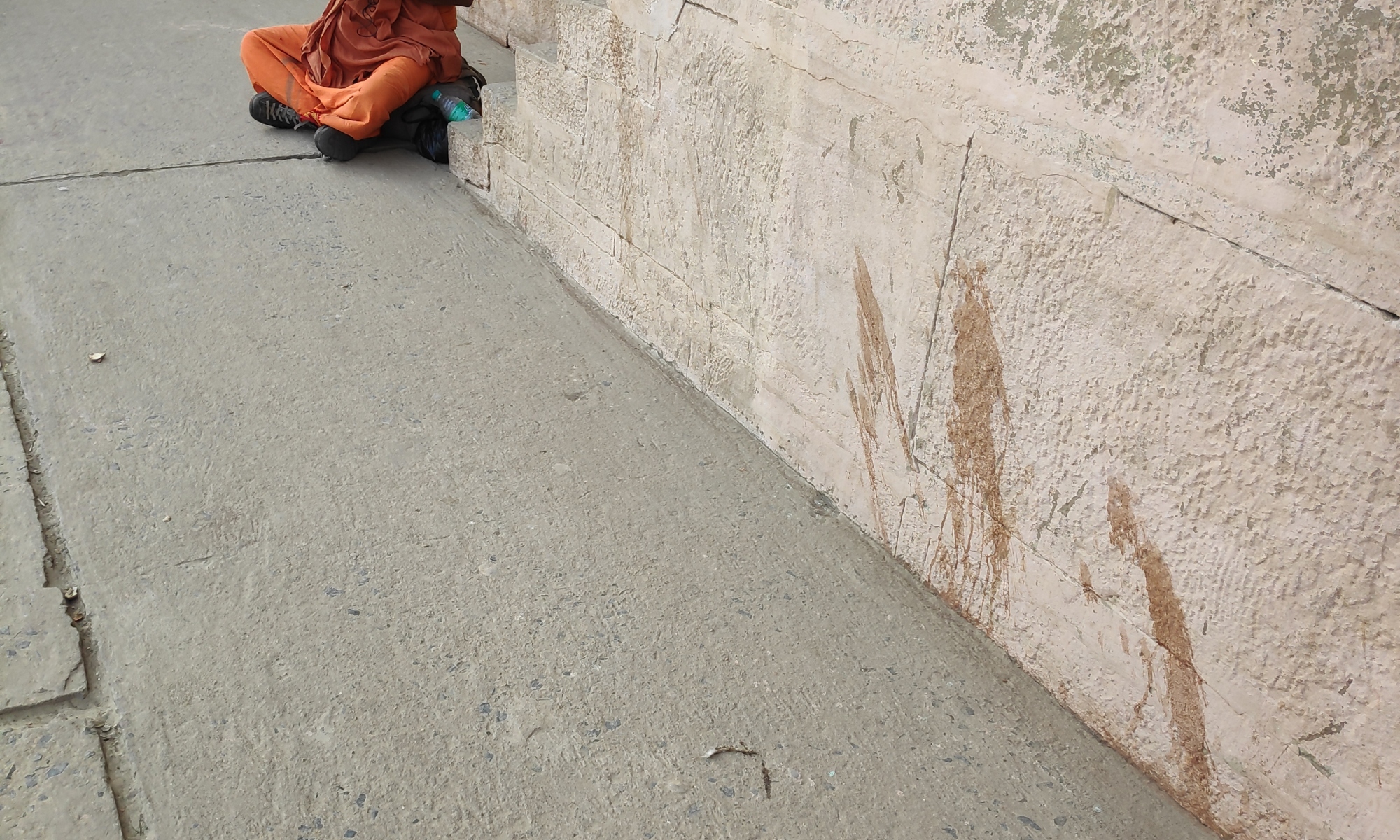 2020 is a weird year for everyone. Here is the story of how I got depressed and decided to hold on, move on, and keep enjoying my life while sharing it with strangers thanks to a beautiful community (Couchsurfing). Spoiler alert: I am aware that so many people lived more stressful and more difficult situations than mine. I am lucky enough to come from France, a wealthy country.

For me, this year started extremely well: I was living my biggest dream, I was finally backpacking solo around Asia. I dreamt of this for the past 8 years. I worked hard and saved up for years, spent countless hours on the internet or in libraries to read the advice provided by experienced travelers and learn more about the countries I would possibly visit. My goal: being prepared to improvise! Being medically, physically, mentally, financially prepared to go with the flow and face any kind of unpleasant situation. I wanted to learn as much as possible about the history, the politics, and the geography of the countries I would have come across. I wanted to travel slowly and intensely, making both local and international friends all around the way. Surfing was once more what suited my style and I realised how much I missed it; how much I missed this adrenaline before meeting my host, how much I missed walking in as a stranger and leaving as a friend, how much I missed stepping out my comfort zone and eventually feeling home thousands of kilometers away from home.

I started this adventure in India, a country which always fascinated me. It was my second time there but those of you who went there know that one can never be prepared…

On the very first day, as I was still jet lagged and still not realising I was eventually leaving the day I waited for almost a decade, I met Arkajit: my first CS host in India. I instantly clicked and connected with him. We became friends in a glimpse. On my second day, he took me to Rajasthan on an overcrowded Indian bus. From Delhi, we went all the way to a rural area of Rajhastan. There, we met up with Indian travelers who used to meet up and explore India together. I was the youngest, I was the only European and I could clearly tell that I wasn’t as welcome as some of them said. I experienced the first of a long series of cultural shocks. A man decided to take the lead and organize every single minute of our day. Many of us did not know him but he was the older man and he was a doctor/soldier in a very patriarchal society where soldiers are glorified. It took him a few days to understand that I wasn’t one of those white guys who go to developing countries for the sole purpose of posting sad pictures on Instagram and judge people. For the first 2 days, he talked to me badly. He then realized that I made the effort to learn the basics of Hindi and noticed that the others seemed to like me. He then became more friendly.

Back to Delhi, I spent a lot of time with Arkajit, we would explore the city, have nice talks, meet up with his friends, enjoy Delhi’s atmosphere.

After almost 2 weeks, I decided to hop on a bus and go to Rishikesh a very nice place in the mountains, a backpacker’s hub, the capital of yoga. This was one of the best decision I ever made on a solo trip. Everyone told me not to waste my time there because even though it’s a very nice place it’s also a small one and I would get bored. I gladly ignored that advice and stayed 2 weeks.

In Rishikesh I befriended a group of almost 10 people from so many nationalities. My friends and I decided to wake up at the dawn, rent some scooters, enjoy the view from the mountains, go to small villages. One day, we met a sadhu who was living in a cave. We played cricket and had a tea with him. It was such an incredible experience…

The next day, after one more of those short nights full of interesting talks with inspiring people and one more of these early journey to admire stunning landscapes from the top of a temple I hopped on a bus and traveled for almost 15 hours before to reach the Himalayas (where I got extremely sick in a city where there was no hospital).

I met people from all castes, all communities, all backgrounds and passionately talked for hours with them. They also took me to really good restaurants.

I went to the Taj Mahal and to the desert in Pushkar before to head Goa, Chennai and Pondicherry.

In India, I also attended weddings and explored remote and non-touristy areas with my local friends.

I then decided to realize another of my dreams and hopped on a plane to Bangkok.

In Bangkok, I met a super nice guy from the Netherlands. A friend from Belgium (a girl I met in India) also joined me. The three of us got well along and decided to learn the basics of Muay Thai, rent a car and drive all the way to the islands. We had a crazy week on the road, went to the jungle, crossed countless cities and spent hours laughing, eating, partying and training together. Sometimes we were sad but we would always support each other.

I had already been on the road for 6 months when Thailand’s prime minister decided to declare the state of emergency and decided that all foreigners who had flights to go back to their country should leave in about 48 hours at the latest.

I didn’t sleep during those 48 hours. I went back to Bangkok after overcoming many problems and flew from Bangkok to Moscow, from Moscow to Rome and from Rome to Paris before to hop on a train. It was a 50-hour trip and it was way too brutal. I had no time to process this deception, my dream had come to an end without that I could even think of enjoying things for the last time.

I went back to my parents place jetlagged and depressed. France was going under quite a strict lockdown and I couldn’t even meet my friends to talk and ventilate.

I tried really hard to focus on my health, I did some sport, I’ve read, I meditated and focused on my other dream: getting in this interpretation school in Paris (ESIT). I studied for hours every day for almost 2 months but I didn’t get in.

I was sad and disappointed but I wanted to give it another shot by June 2021.

In the meantime, I decided to wait until Italy (my favorite country in Europe) would reopen its borders. It happened after a few months. At first, I wanted to volunteer with refugees or find a job somewhere in Italy. I eventually decided to take a riskier but more interesting path: I sent my resume to hundreds of resumes to translation agencies all around the world (I hold a Master degree in translation), took my backpack and left France to go on an epic road trip with a friend from France who wanted to learn Italian and my Italian friends. I went from Bologna to Siracusa, it was a one-month adventure and it was absolutely worth it.

Doing this, I reached my goal: I found a way to become again this super-positive man I am and move on. After living tons of exciting adventures (going on small islands, diving from a waterfall, going to a very secret and exclusive restaurant, going to graduation parties…) I settled in Palermo, Sicily.

Palermo will always be special to me. This city is the place where I’ve learned Italian on my own, the city where I befriended Italians for the first time.

I now work as a freelance translator and host many interesting people through Couchsurfing!

I had intense debates about death penalty or marriage with people from Iran and Japan, I practiced my Spanish with this super nice fellow from Ecuador and I hosted a 74 y.o traveler from southern Italy!

Once more, Couchsurfing added fun to my life, it made me grow, it made me laugh, it made me feel good. Life is not easy every day but someone I love often says: « It’s just a bad day, not a bad life ».

Thank you so much guys, you’re an amazing community! Big thanks to my friends from India. I also want to thank all of the people who helped me in any way during this adventure. 2020 is the year I turned 25, the year I started living my biggest dream, the year I had to stop living this dream and stuggle to move on. 2020 is a year I will never forget.

What about you? How did the Covid affect you? Were you traveling when it all started?